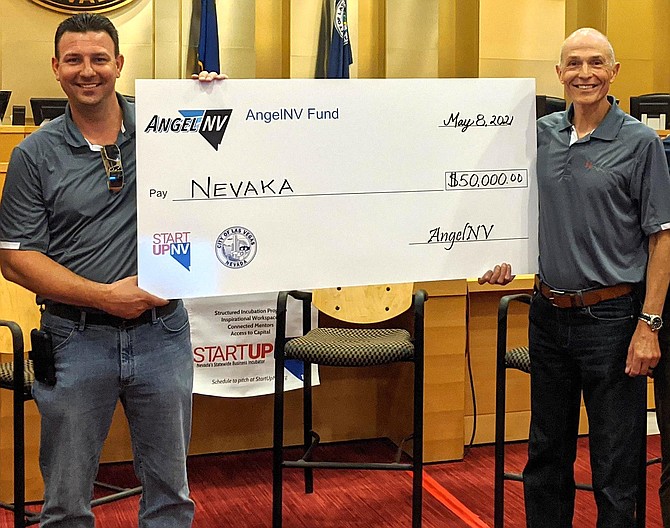 Nearly 50 investors awarded $300,000 to a trio of Silver State startups, including one business based in Northern Nevada, at a Shark Tank-style event held at Las Vegas City Hall on May 8.

The investment total surpasses the initial goal of AngelNV, which mentors startups and provides access to a network of capital partners, of $200,000 pooled from 40 investors to one company.

According to a May 10 press release, SafeArbor — a Las Vegas-based female-owned company that produces a smart container system for storing, tracking and processing sensitive cargo in complex regulatory spaces — placed first in the competition, earning a $200,000 investment.

Currently, the company offers contactless, cashless hardware systems for cannabis pre-order pickup, according to the release.

Two runners-up also received an investment of $50,000 each:

Longtime electrical contractor Chris Paris founded Nevaka — which gives contractors access to more than 2 million catalog items and the ability to search, create and track material releases, deliveries and backorders — in 2019, according to previous reports.

Mark Aston, a retiree who was serving as a mentor for the nonprofit StartUpNV in Reno (of note, StartUpNV operates AngelNV), became Nevaka’s co-founder in September 2019 and later the CEO in January 2020.

Nevaka, SafeArbor and Freedom Brands were selected among six finalists at the May 8 event, according to the press release, which notes that many AngelNV investors are forming their own separate investment funds “to independently invest more capital in their favorite AngelNV companies, including startups that did not win investment directly from the AngelNV Fund.”

Investors interested in learning more should contact Jeff Saling, co-founder and executive director of StartupNV, who stressed that AngelNV investors need not be “super wealthy” to participate.

“Exceeding our investment goals is a testament to the level of interest in Nevada to support local startups and diversify our economy,” Saling said in a statement. “AngelNV proved to be a great vehicle to connect investors with talented and hard-working founders. Ultimately, we want to enable many people, not just the wealthiest in society, to make great returns from a modest investment while also helping local startups get off the ground and succeed.”